Stop The’Pocalypse! I Wanna Get Off! – Reviewed Winter 2017

Stop The’Pocalypse! I Wanna Get Off! – Reviewed Winter 2017 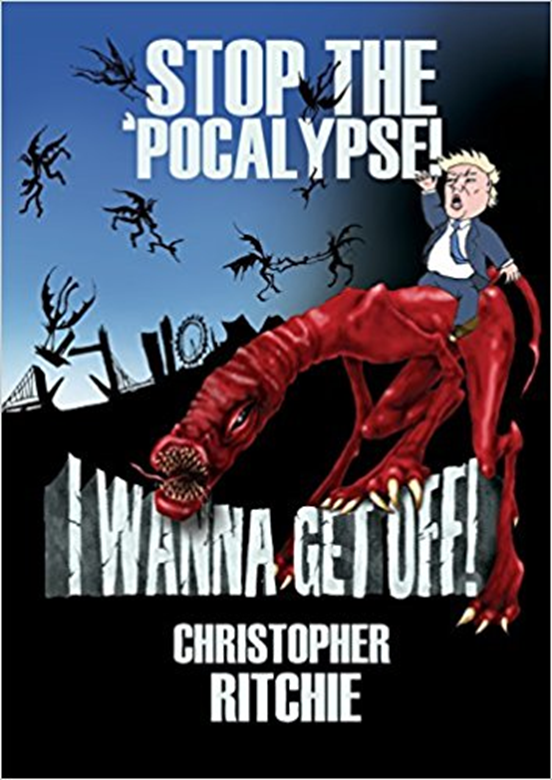 Carrie Bradshaw, the fictitious newspaper columnist in TV’s Sex and the City, almost certainly had her finger on the pulse when she said, “Maybe mistakes are what make our fate…without them what would shape our lives?” Bradshaw was no intellectual heavyweight (and in fairness she never claimed to be), yet in the show’s six- year run, that statement was one of the few truisms to have ever slipped from her mouth primarily because it resonates.

Recently I was thirty minutes late for a conference at which I was scheduled to speak and the only available seat was next to a man I had once been romantically involved with. Embarrassed doesn’t even come close to describing how I felt. Our split hadn’t been amicable and twelve years after going our separate ways, the animosity was still palpable. Why I drew the short straw on that chair is a mystery, but thanks to a fault on the London Underground I spent the rest of the morning sitting next to a man I had forgotten about until that moment. The injustice was enough to get me thinking about the randomness of fate and our ability or otherwise to control it.

If life is a script that has already been written, then maybe I was destined to meet my ex given that he owes me money (£300 to be precise!), and the conference would have been an opportunity for him to pay it back. Yet in the two and a half hours we sat together he never once flashed his wallet while I lacked the nerve to ask back for what was mine. Perhaps God or fate had willed things to turn out that way, although I struggle to accept that. My ex always was and probably always will be tight-fisted and I don’t see why the Almighty or anyone else for that matter should be blamed for his stinginess. That’s no better than claiming that predestination is the cause of natural disasters, extra-terrestrials or the rise of Donald Trump. It was Trump’s “manifesto” rather than divine intervention that got him into the White House, though try telling that to the US theologian and author Lance Wallnau, one of several Christian evangelical leaders who claim to have predicted the Orange One’s rise. According to Wallnau, God personally told him that Trump was “a wrecking ball to the spirit of political correctness” and Isiah 45 was the proof.

Make of that what you will, but there are enough pages on the internet about Trump and the bible as there are about Trump the businessman, Trump the reality TV star and Trump the political maverick. Not only is he one of the most controversial American presidents of recent times but he is also one of the most written about. Bookstore shelves are heaving with Trump biographies, accounts of how he made his money along with fiction based on some of his more infamous moments. Pussy, Howard Jacobson’s satirical novella, was inspired by Trump’s video admission that grabbing women by their crotches was preferable to chatting them up: In “What Happened”, Hillary Clinton’s version of why she lost the 2016 US presidential campaign, she reveals how her “skin crawled” whenever Trump invaded her space during their televised debates. Now science fiction and horror specialist Christopher Ritchie, is the latest newcomer to board the Donald Trump literary bandwagon. “Stop The’Pocalypse I Wanna Get Off!” is a screwball take on the future with time travel, quantum physics and the Book of Revelation as the chosen vehicles, in other words science meets religion meets politics in one irreverent smackdown! Is it radically different to House of Pigs and The Ordinary, the novels that made Ritchie’s name? Absolutely! Yet what unites this book to its predecessors is the concept of ordinariness, one of Ritchie’s favourite themes. Strange things can and often do happen to normal people when they least expect it, and musician Marty Molloy is the protagonist through which that belief is explored.

Marty is born half a century after “the third world war kicked off proper” in 2018, when Russia fired nuclear weapons on America and America fired on itself leaving behind a “United State” somewhere in Texas. Countries have either disappeared off the map or shifted geographical position, in part because “the Chinese’d been messing with subterranean shit, on the pretension of frackin’ for oil”. The UK looks reasonable in comparison although it can no longer claim to be a kingdom since only the south exists!

Marty’s world goes even more pear shaped when he rescues a young girl from a vicious attack, only to discover that “sweet” little Jessie/Angie is not a crime victim but Earth’s last angel. She’s on a mission to both stop the “false apocalypse” that occurred a hundred years previously and destroy the man who made it happen, the US president John Thump! Marty is her chosen instrument but does he have what it takes to reverse history’s tide? What good is a Day of Judgement without the four horsemen of the Apocalypse and where can he find them? How can he travel back in time to face down his nemesis if he doesn’t even know where to start? Fate holds the key and before he knows it Marty is thrown into a whirlwind adventure that includes several brushes with the devil, trench warfare in a World War 2 battle re-enactment, a stroll through the Garden of Eden and coming face to face with multiple versions of himself.

It’s a complicated story that Ritchie controls with a first-person narrative, strong, rounded characters and some low down dirty humour. His writing hooks the attention with the brilliance of its quirkiness and it’s obvious that he gets an all-out buzz both from playing with words and manipulating their meaning. In Ritchie’s hands words are either truncated, misspelt, subverted or crudely but deliberately strung together to create lasting, provocative imagery. The power of the spoken word and Ritchie’s feel for it is evident from page one, when Marty expresses how he feels about himself in two deadpan sentences: “I’m nothing special. Never was and never will be.” He is laid back and quietly self-effacing about the part he has played in a drama which he defines as “a single pixel in history”. That simple modesty is one of the reasons why we endlessly root for him, especially during his encounters with Thump. These are some of the finest dialogue moments in the book as Marty’s decency is pitched against Thump’s moral emptiness. He is a crass, vulgar, bully for whom running a country is the same as getting hand relief on a discount: “You think I want to be president? I’m giving out the mother of all handjobs in exchange for the big prize at the end.” No wonder Marty wants “to wring his neck and watch his eyes fill with blood” although fate intervenes before he gets a chance.

Marty is the innocent who was in the wrong place at the wrong time for the weight of the world to fall on his shoulders. Was that down to coincidence, or something else? To answer that question would be to risk giving away the ending, although it is worth adding that the final Thump/Molloy encounter isn’t so much the art of the deal but more like the art of the double cross.

Stop The’Pocalypse is a dark, ambitious work that packs a decently sized punch thanks to some excellent writing, authentic street slang humour and the kind of crazy one liners I’d be more than happy to drop into a conversation, (“hot damned biscuits in a brown beer barrel”). Thankfully Ritchie also avoids the trap of over hammering Thump’s obnoxiousness. Apart from the fact he’s a misogynist who probably spends his downtime reading Hustler in the loo, there isn’t much else the reader needs to know about America’s Commander in Chief!  Yet if I had to find one fault with this novel (and it is a very minor one), I would say there were just a few too many references to faecal accidents in trousers. One or two of them I can handle (metaphorically speaking), but more than that is faecal overkill!

That aside the main strength of this novel is in its use of satire to ask some very big questions. How does a bombastic loud mouth like John Thump land himself the most powerful job in the world? Is humanity worth saving if it’s willing to cast aside reason to cosy up to a dangerous charlatan? Are there anymore John Thumps lurking in the shadows and can they be stopped before they’re let loose on the world? There are no easy answers, although Lance Wallnau might have a few ideas. As for the immediate future, I predict that by the end of the year there’ll be more Donald Trump inspired books coming to a store near you. Remember, you read it here first!